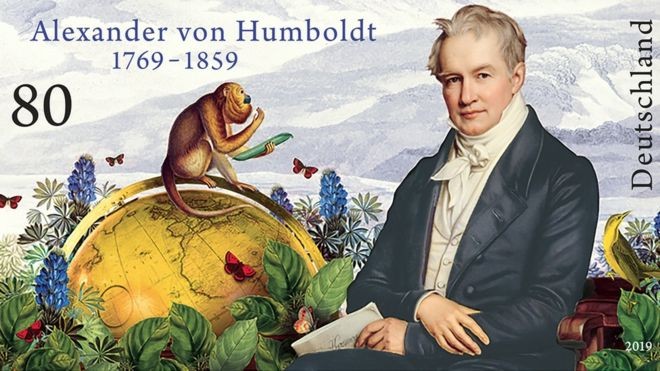 It is often said that Alexander von Humboldt "rediscovered" America. The German explorer is called by some the "second Christopher Columbus", the first European to reach the American continent.

The parallelism between the two is part of an extensive list of coincidences, science historian Laura Dassow Walls told BBC News Mundo, the BBC's Spanish service.

Newspapers and books repeated several times that "Columbus and Humboldt departed from Spain to the New World, both led voyages of discovery, sailed with the permission of the Spanish crown and landed in the same place," Walls explains, noting that the latter fact, however. , it's not true.

But, according to the professor at the University of Notre Dame in Indiana, USA, and author of the Humboldt book The Passage to Cosmos, these two men are also united by differences.

In this sense, some prefer to call the German with another label, the "scientific discoverer of America".

The best proof of his profound legacy, 250 years after his birth, is in his name: he is used to name many places, landforms, plants and animals.

Only in Latin America is there a current that runs along the coasts of Peru and Chile, a mountain in Venezuela, a mountain range in Mexico, a commune in Argentina, a river in Santa Catarina, Brazil, and a bay in Colombia, among others. 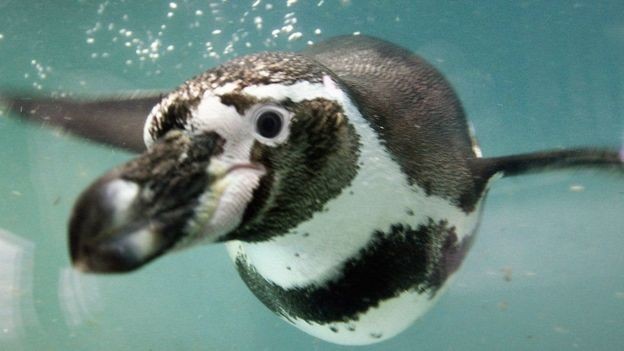 Humboldt's penguin lives off the coasts of Chile and Peru, as well as on nearby islands in the Pacific Ocean. (Photo: Getty Images via BBC)

He also named a species of penguins and a giant squid, a crater on the moon, and an asteroid. Even the state of Nevada, in the United States, was almost called Humboldt.

The German's arrival in America, three centuries after Columbus, again changed the continent's destiny and the axis of world power.

The millionaire inheritance
Alexander von Humboldt was born on September 14, 1769 in Berlin, in a rich and aristocratic family, which was close to King Frederick of Prussia.

"When his mother died, he was about 25 years old and inherited a fortune," says Andrea Wulf, author of an award-winning biography about the naturalist called The Invention of Nature (published in Brazil by Critics).

"He spent almost all the money on a five-year exploration trip in Latin America," says Wulf. "It gave him unprecedented freedom, which I find very important when we look at how he undertook his writings later."

But before traveling, he had to ask permission from King Charles 4 of Spain to go to territories that were then colonies of the country.

"Enlightened monarchs wanted to revive the economy of their colonies and modernize the administration," wrote Leila Gomez, director of the Center for Latin American Studies at the University of Colorado, in an essay published this year.

Therefore, he added, the crown decided to appoint Humboldt as "New World mine inspector", allowing an almost unprecedented exception to let a foreigner enter the Spanish colonies.

For Gomez, this crown's reluctance to admit foreigners explains why "knowledge of much of the American continent's natural resources has remained a mystery outside Spain for a long time."

But Walls cites a second reason in his book: For Europe, America's very existence, with its rich nature and culture, was a challenge to its values, beliefs and traditions. 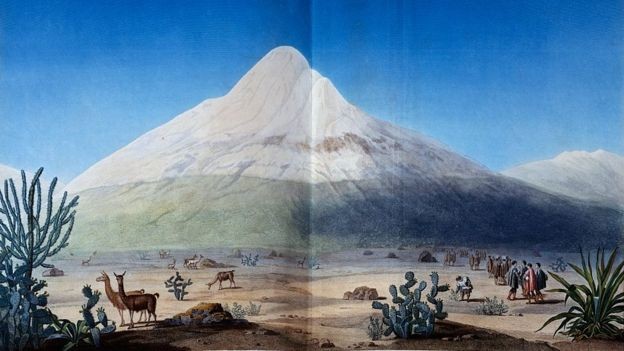 Humboldt's illustration of the Chimborazo: he climbed her at a time when she was believed to be the highest mountain in the world. (Photo: Getty Images via BBC)

The 'anti-conqueror'
In Walls's words, Humboldt's work in America was a kind of "anticonquist."

Despite his title as mine inspector, he did not take gold or silver home, but scientific notes and astronomical measurements. He also drew over 6,000 geological, botanical and fossil samples and made numerous illustrations.

"Among his most remarkable achievements and discoveries are the climbing of Chimborazo, the then highest mountain in the world – as was believed at the time in the West -, discovering the communication between the Orinoco River and the Amazon. He also invented the isothermal lines and isobars, "wrote Gomez.

For three decades, Humboldt devoted himself to narrating his trip "in 32 volumes that included botany, zoology, geology, astronomy, meteorology, public relations, economics, and geography of the American countries he visited."

His work was so influential that British naturalist Charles Darwin stated that if he had not read Humboldt he would never have written Beagle's Voyage, an expedition book that would later be one of the main influences for The Origin of Species.

However, for Gomez, the German's main merit "lies in having made his trip at one of the most special moments in Western history, in the prelude to Latin American independence."

Diplomacy and science
According to Walls, Humboldt was, in a sense, a diplomat: "He saw knowledge as a form of diplomacy, not as a form of power or control."

"He was a deep admirer of (George) Washington, (Thomas) Jefferson and (James) Madison," considered the founding fathers of the United States.

During his trip to Latin America, but especially to Venezuela, "Humboldt talked about the independence movement and helped spread the American ideals of freedom and equality," says Walls.

Humboldt even met several times with Simon Bolivar, the leading leader of Latin American liberation from the colonists, who recognized the influence of the naturalist. In fact, Bolivar directly called him "the discoverer of the New World."

"While Columbus was the cause of entire nations being reduced to servitude, Humboldt paved the way for the revolutions that gave the nations of South America independence," Walls says.

Humboldt, who claimed to be "half American," says the teacher, "loved South America and felt at home." He considered the region "the most beautiful in the world because of its enormous natural and cultural diversity."

He believed that by opening Europe's eyes to this wealth, "he would find solutions to war, oppression, and the abolition of slavery."

His constant militancy against imperialism and slavery undertaken by Europeans would find enemies in the court of Berlin, the Spanish crown and the government of Napoleon Bonaparte in France.

Father of ecology
According to Mary Louise Pratt, a retired New York University researcher, Humboldt's "discursive audacity" sought not only to reinvent the European imagination about America, but "the planet itself."

This is why Wulf, in his book, calls him "the inventor of nature": he created the notion that the earth is a living organism, a tissue where everything is interconnected "from the smallest insect to the tallest tree."

"It shows how vulnerable nature is, because if pulled by a thread, all the tapestry can be undone," she says.

At that time, Humboldt had already seen that this nature, seen as "a web of life," was threatened by human actions, making him the "forgotten father of ecology," says Wulf.

He was the first to warn of the links between deforestation and environmental disasters, becoming a precursor to climate change studies.

To Walls, "at a time plagued by the anxiety of imperial conquest and destruction, Humboldt was a Columbus of the Enlightenment, a figure of redemption and hope."

Get to know the origin story...

Significant tornadoes are possible Saturday during...